On November 26, 2015, we ran an article about guns the firearm enthusiast might desperately want for a nice Christmas (or Festivus, or Kwanzaa, or Hanukah, or Winter Solstice) present.  This year we re-examine that list, and this time we do it with an eye toward history.  If you do not intend to actually shoot the gun, there are non-firing replicas available of almost any major military arm you might want.

Many states have a deer hunting season for black powder muzzle loading guns, which can greatly extend your time in the woods and your chance to land a nice buck.  You can go with a replica arm that closely resembles historical firearms, or with a modern, plastic stocked, “in-line” type powered by powder pellets and using modern sabot bullets.  Perhaps a flintlock Kentucky (Pennsylvania) long rifle replica would give a more authentic experience.  Even if you are not a hunter, experiencing a long-gone technology can be a hoot. 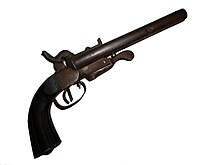 One of the many Colt or other replicas could make you feel like you are living in the Old West.  (Be sure to keep a rolled up $1 bill in the chamber under the hammer!)  If the Old West is not your historical bag, you could get a single shot derringer, a Howdah pistol, a Duck’s Foot Pistol or the like.  You could complete your Pirate outfit with a nice replica.

The 8 shot semi-automatic rifle used by GI’s in World War II and Korea, General George S. Patton himself called it “The greatest battle implement” ever developed.  Normally found in .30 caliber government, or 30-06, some can be found in .308 Winchester caliber (7.62mm NATO).  If you cannot find a suitable surplus gun, there are newly manufactured M-1’s out there, but they can cost even more than the originals.

One of the first widely issued bolt action modern rifles, the Mosin is the bargain surplus military rifle of the bunch.  Built to function in all conditions, the rifle may not be pretty, but they work!  The 7.62mmR caliber is potent and the rifles are quite accurate.  The Russians and other made 37 MILLION of these guns in a number of varieties.  The highest scoring snipers used them.  They have been in continuous military use from 1891 to this day.  Loaded with a 5 round stripper clip, they can be operated fairly quickly.  I wish I bought more than one when they were under $100 apiece (just a few years ago).

Another bolt action military rifle with an incredible history, this is the rifle the Germans used in World War I and World War II.  When the US first faced the deadly M98 during the Spanish-American War, the US military immediately knew they had to replace the Krag-Jorgenson with something like the Mauser, so the US basically just copied the M98 and called it the 1903 Springfield.  These rifles are no longer cheap and are becoming harder to come by, so if you want one, get it now.

These little rifles were the most produced US long arm of World War II, and can be found all over the world.  Not only did a bunch of manufacturers build them for the US military, private companies have made civilian models for decades.  Real original war relics can be highly prized collectibles, depending on manufacturer, condition, etc., and the post-war civilian made ones are much cheaper.  Often criticized for lack of power, the .30 caliber carbine is more powerful than a .357 Magnum pistol and can be used to hunt deer, hogs, coyotes, and used in home defense.  Modern soft point and hollow point ammunition makes all the difference. 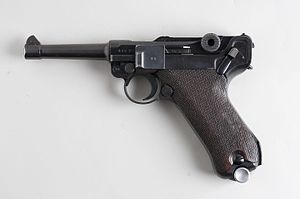 Last time we put the venerable M1911 .45 ACP pistol on our list, and now we put another iconic military piece of history on this year’s list.  Expensive and time consuming to make, not as rugged as the M1911 and prone to failure from dirt, the Luger is about the coolest pistol on the planet!  Just because they look so cool I want one.  Original copies may be expensive and may or may not be in good shape, but reproduction models have been made in the past few decades and are usually of decent quality. 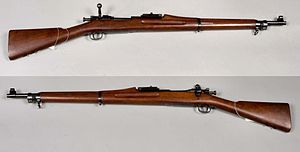 Yes, the ’03, America’s answer to the M98 Mauser.  In fact, the US had to pay copyright infringement for basically copying the Mauser!  Still, the American made rifle is top notch, and ones made during World War II specifically for sniping are a great war relic to own.  These rifles are also getting harder to find, with the price rising commensurately.  Use the rifle Sgt. Alvin York used to win his Medal of Honor.  (He also used a .45 M1911.) 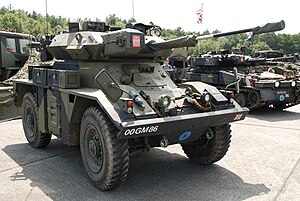 We used the British spelling because this military surplus vehicle once served in the British military.  Built in 1971, the Fox was armed with a 30mm cannon and had a 7.62mm machine gun as well.  The guns on this armored car are Hollywood simulations that fire realistic looking flames out the muzzle, since the Fox was retired from the military and bought by Hollywood for use in films.  With a 190-horsepower engine, this beauty can zip along at 64 mph, faster than most armored vehicles.  Who would dare to pull any road-rage stunts on you when you’re driving your Fox???  For less than $50,000 (just a little less) you could own a real “Muscle Car.”  We found this baby while researching military surplus arms at https://www.atlanticfirearms.com/component/virtuemart/featured-not-published/fv721-fox-armored-car-detail.html?Itemid=0.

These Cold War relics can be found in used, military surplus condition or in brand new manufacture, and either way they are fairly cheap (often around $500).  Both chambered in 7.62 x 39mm, the guns are not only great for collectors, but surplus ammo is cheap and easy to find.  Modern hollow point bullets make these guns appropriate for deer sized game, an added bonus.  Of course, with legendary reliability, these rifles make excellent home defense (against zombies?) weapons and are fun to shoot.  For collectors, stick with the wooden stocked original looking guns.  Modern reproductions can be had in a variety of calibers, if you so desire.

Question for students (and subscribers): What is the greatest gun in history?  Please let us know in the comments section below this article.

The featured image in this article, a photograph by Antique Military Rifles of two classic frontier rifles,  is licensed under the Creative Commons Attribution-Share Alike 2.0 Generic license.  This image, which was originally posted to Flickr, was uploaded to Commons using Flickr upload bot on 29 March 2009, 22:32 by 19th Century Firearms. On that date, it was confirmed to be licensed under the terms of the license indicated.