On October 27, 1838, Missouri’s governor issued an order for all Mormons to leave the state or face extermination!

After Joseph Smith founded the Church of Christ (later called the Church of Jesus Christ of Latter Day Saints or popularly known as the Mormon Church), he and his followers had a downright hellacious time finding acceptance in mid-nineteenth century America.  His journeys in Ohio and Missouri were filled with violent incidents.  For example, in 1832 a mob tarred and feathered the first Mormon leader. 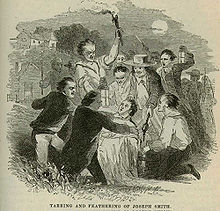 A mob tarred and feathered Smith in 1832.

The late 1830s were not much kinder.  The situation for the Mormons in Missouri escalated into the notorious 1838 Mormon War by August 6,  1838.  In this conflict, Smith faced opposition from among others, Major General David Rice Atchison, a man who later gained fame for allegedly being Acting President of the United States on March 4, 1849 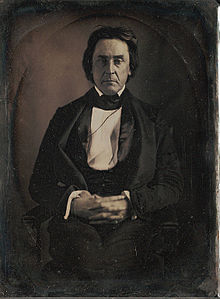 During the “war”, twenty-two people lost their lives.  In the months that the conflict raged, the most notorious aspect of it came on this day in 1838 when Governor Lilburn Boggs issued Executive Order 44 to General John B. Clark, which read in part: “The Mormons must be treated as enemies, and must be exterminated or driven from the state if necessary for the public peace–their outrages are beyond all description.  If you can increase your force, you are authorized to do so to any extent you may consider necessary.”

The events that followed this “Extermination Order” took on the dimensions of a sort of attempted religious genocide rather than a “war”.  At the Haun’s Mill Massacre on October 30th, some 240 Livingston County Missouri Regulators, militiamen and volunteers attacked a Mormon settlement in the bloodiest event of the war, killing at least seventeen people and injuring perhaps a dozen or so others.  Three of the attackers also suffered injuries; none of the named attackers were ever prosecuted for their actions.

The Missouri state militia then besieged the Mormon headquarters, which ultimately surrendered.  Not only did the Mormons have to agree to leave the state, their leader, Joseph Smith, was nearly executed after a brief trial on November 1, 1838.  Following the conclusion of the court martial, Major General Samuel Lucas of Missouri ordered General Alexander Doniphan to “take Joseph Smith and the other prisoners into the public square of Far West and shoot them at 9 o’clock tomorrow morning.”   Doniphan thought the order to be “cold-blooded murder,” and replied, “I will not obey your order.  My brigade shall march for Liberty to-morrow morning, at 8 o’clock, and if you execute those men, I will hold you responsible before an earthly tribunal, so help me God!”  Smith, therefore, owed his life to Doniphan’s sense of morality! 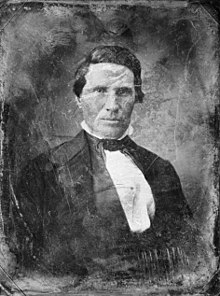 From there, Smith and his followers moved on to Illinois, where he was jailed in 1844.  While in jail, a mob of 150 or so men attacked him, shooting him both before and after he fell through a window.  The death of Joseph Smith was, of course, not the end of Mormonism.  Nor was it the end of conflicts between Mormons and non-Mormons.  For from March 1857 to July 1858, another Mormon “War“, this time in Utah, would rage, taking even more lives than what occurred in Missouri in 1838, but the events of that conflict are something we will save for another day in History and Headlines!

Question for students (and subscribers): Why were Mormons persecuted in their early history?  Please let us know in the comments section below this article.

For an account of the war in general, see The 1838 Mormon War in Missouri

The featured image in this article, a photograph by Americasroof of the site of w:Lilburn Boggs home on the w:City of Zion plot in w:Independence, Missouri where w:Porter Rockwell was accused of shooting him in the head, is licensed under the Creative Commons Attribution-Share Alike 3.0 Unported license.