On March 26, 1997, 39 members of the Heaven’s Gate awaited transport for their souls to a waiting UFO with $5.75 in each person’s pants pocket to pay for tolls!

Digging deeper, we find Marshall Applewhite and Bonnie Nettles heading up a religious cult founded by Applewhite after a “near death” experience in the 1970’s when he had a heart attack.

Claiming to be descended directly from Jesus Christ, Applewhite also claimed that he and his nurse, Bonnie Nettles, were spoken of in the Book of Revelation part of the Bible that mentions “The Two.”  These two became religious leaders eager to spread their word, combining Christian religion with UFO related beliefs, sometimes going by aliases and changing the name of their cult a few times, notably from Human Individual Metamorphosis to Heaven’s Gate. 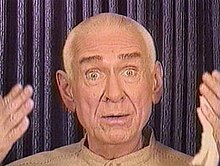 Applewhite taught his followers that they were just shells of the people that had previously occupied their physical bodies that had been taken over by aliens, or what he called “walk-ins.”  In order to avoid the imminent end of the world all the walk-ins would have to kill their human host body and have their alien soul transported to a space ship hiding behind the Hale-Bopp comet that was passing brightly past earth in 1997. 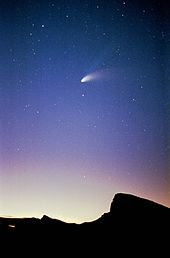 Comet Hale–Bopp over California in April 1997

Of course, anyone deserving of eternal happiness in space needed to live a clean and austere life on earth, and all members renounced material things and sex, with some of the male members including Applewhite voluntarily undergoing castration to help achieve a pure life!

On March 26, 1997, outside of San Diego in a mansion the group rented in Rancho Santa Fe, Applewhite and his followers, complete with extra-terrestrial toll money, downed pineapple and Phenobarbital and followed with vodka for good measure.  If this incident is not cracked enough, they also put plastic bags on their heads to be sure to suffocate when they passed out!  Knowing how important it is to look good when traveling, all group members were dressed in black shirts and sweat pants, and each member wore brand new Nike athletic shoes!  Just in case anyone would wonder who they were, each member also sported an armband that had “Heaven’s Gate Away Team” on it!

Additional cracked facts about this incident include one of the members was the brother of the actress that played Uhura on the Star Trek (original) television program, and that it took 3 days for all members to kill themselves. Additionally, one member remained alive in order to continue to spread the word about their religion.  Members ranged from as young as 26 years old to 72 years old, with Applewhite being 66 years of age.  Bonnie Nettles missed the big event, having died in 1985.

Although we are pretty sure the world as we know it has not ended or been “cleansed” of humanity, we have no way of knowing if Applewhite and his followers are up there in space somewhere, traveling and paying their tolls!  Question for students (and subscribers): What do you think?  Please let us know in the comments section below this article.

Hewes, Hayden and Brad Steiger. Inside Heaven’s Gate: The UFO Cult Leaders Tell Their Story in Their Own Words. Signet, 1997.