On June 11, 173, during the Marcomannic Wars (166–180), the Roman army in Moravia was encircled by the Quadi, a Germanic tribe, who had broken the peace treaty of 171.  In a violent thunderstorm, emperor Marcus Aurelius (r. 161–180) defeated and subdued them in the so-called “miracle of the rain”!

Marcus Aurelius, the Roman emperor in the beginning of the major motion picture Gladiator (2000), is considered the last of Rome’s Five Good Emperors and, arguably, the last emperor of the Pax Romana or “Roman Peace”.  The author of one of the greatest works of philosophy, Marcus was no mere philosopher.  He (or rather his armies) also fought major wars on Rome’s borders, particularly against Parthians and Germanic tribes.

The war against the Parthians was militarily successful; however, Roman soldiers returned with a plague that created a pandemic.  This so-called Atonine Plague or Plague of Galen killed perhaps five million people throughout the Roman Empire.

The war against the Marcomanni, Quadi, and Sarmatians nearly resulted in Roman expansion at the expense of these Germanic tribes. 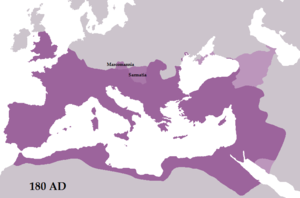 This map shows the Roman Empire during the reign of Marcus Aurelius.  His annexation of lands of the Marcomanni and the Jazyges – perhaps to be provincially called Marcomannia and Sarmatia – was cut short first in 175 by the revolt of Avidius Cassius and then in 180 by Marcus’s death.

It was during this effort that Marcus and his army was saved by the “Miracle of the Rain” in 173.  This famous incident, later depicted on the column of Marcus Aurelius and on coins, was also recorded by contemporary historian Cassius Dio (155–235).   The Legio XII Fulminata, hemmed in by a superior Quadi force, also suffered from the heat and thirst.  Suddenly, a shower refreshed the Romans, while lightning struck the Quadi.  Was the sudden storm a lucky break from nature or something more?  Some contemporaries and historians, including Dio, attributed Rome’s salvation to divine intervention.  Dio credited an Egyptian magician praying to Mercury for the “miracle”, while Christian writers such as Tertullian (c. 155 – c. 240) instead attributed it to a prayer by Christians being answered by God.

Whether it was just nature or some kind of divine intervention, it was not enough to crush the Germanic tribes once and for all.  Marcus’s annexationist goals were first frustrated when a revolt broke out in Rome’s eastern provinces in 175.  Although Marcus suppressed this rebellion and returned to the Danubian frontier, his death not long afterwards in 180 effectively ended Roman expansion in Europe north of the Danube.

Question for students (and subscribers): What might have been the consequences for subsequent history if Marcus had achieved his goals and established longer lasting Roman provinces of Marcommania and Sarmatia?  Please let us know in the comments section below this article.

The featured image in this article, a photograph by Cristiano64 of The “Miracle of the Rain”, from the Aurelian column, is licensed under the Creative Commons Attribution-Share Alike 3.0 Unported license.