Tuesday, February 25
Trending
You are at:Home»February»February 9»February 9, 1825: What Happens if No Candidate Wins the Electoral Vote?

On February 9, 1825, the United States of America had the only incident (so far) of no presidential candidate winning a majority of the Electoral votes in a presidential election, forcing the House of Representatives to elect our next president.

The presidential election of 1824 had been contentious, which is how these things usually are!  In this election there were four major candidates instead of the usual two.  Presidential elections often have numerous obscure candidates, but only rarely does a third or fourth party candidate garner enough votes to actually win an electoral vote.  Senator Andrew Jackson of Tennessee seemed like the man to beat, and Secretary of State John Quincy Adams and House Speaker Henry Clay of Kentucky would provide stiff competition, with Secretary of the Treasury William Crawford rounding out the top 4 candidates.  Other potential major candidates that had withdrawn from the election included Secretary of War John Calhoun and Secretary of the Navy Smith Thompson.  A fracture in the major political party of the day had resulted in the extra candidates.

Picture of John Quincy Adams by George P. A. Healy.

Per the provisions of the 12th Amendment, only the top 3 electoral vote receiving candidates were voted on by the House of Representatives.  Henry Clay, Speaker of the House was left out of the running, and as a most vehement opponent of Jackson would prove to be pivotal in swaying the vote to Adams. 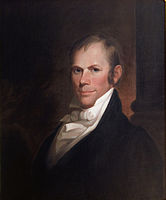 John Quincy Adams won the vote in the House of Representatives with 13 states voting his way (87 votes, or 41%) to 7 states for Jackson (71 votes or 33%) while loser Crawford snagged 4 states (54 votes or 25%).  Andy Jackson and his followers were livid!  Claiming fix, foul, rigged, corrupt and every other epithet (Does this fiasco sound familiar?), Jackson had expected to win the election since he had won clear popular and electoral vote pluralities.

The 1824 election was the only time the presidential vote was thrust into the House of Representatives, but as long as we have our current Electoral College system this scenario can happen again.  Andy Jackson got a measure of revenge by winning the 1828 presidential election, and he served as our 7th president for 8 years. 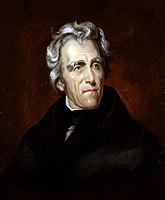 Question for students (and subscribers): Should we keep the Electoral College or move to some method of popular vote?  You tell us what you think in the comments section below this article.