Tuesday, February 25
Trending
You are at:Home»August»August 7»August 7, 1679: What Was the First Real Ship to Sail the Great Lakes?

On August 7, 1679, a small ship named Le Griffon (The Griffon) that had been built under the direction of famous explorer of the New World René-Robert Cavelier, Sieur de La Salle, was towed to a point on the Niagara River from which it became the first European sailing vessel worthy of the designation “ship” to ever sail the Great Lakes.  As the Great Lakes Region Native Americans did not build sailing vessels, Le Griffon was by default the first ship of any origin to sail the Upper Great Lakes.  European explorers had brought sail technology to the Great Lakes (Lake Ontario) earlier, but only on relatively tiny vessels.  Le Griffon, though not large, was recognizable as a ship of its time.

The exact measurements of Le Griffon, named for the Greek mythological monster of a lion’s body and rear legs with the head and wings of an eagle and the talons of an eagle for front legs (alternately spelled “gryphon,” “griffon,” or “griffin”), are unknown, with an estimate of perhaps 40 feet long and 15 feet wide as a larger end guess.  The brigantine rigged vessel displaced about 45 tons with 2 main masts and was armed with a respectable battery of 7 cannons (2 brass and 5 iron).  Prior to the voyage of Le Griffon into Lake Erie, canoes and large canoe-like vessels (up to 25 feet long) were the only boats on the Lake.  On Lake Ontario, prior to Le Griffon, Europeans used makeshift masts and sails on open canoe-like boats, boat that were not equipped with decks and other normal accouterments found on a “ship.”  Depending on how exactly you define “sailing ship,” Le Griffon may be considered the first sailing ship on the Great Lakes, period.  Despite a famous woodcarving of Le Griffon that shows her equipped with 2 masts, there is a distinct possibility the ship was actually rigged as a barque (bark) with only 1 mast.  It is believed by some authors that Le Griffon was basically similar in construction to the ships used by the European explorers to cross the Atlantic, though on the small side.  Of course, the bow of Le Griffon was adorned with a carving of a griffon.

Built at the order of La Salle to explore the possibility of a “Northwest Passage” to the Pacific Ocean, Le Griffon made its maiden voyage through Lake Erie, Lake Huron and Lake Michigan, picking of a load of furs on its travels at an island in Lake Michigan.  Unfortunately, the little ship was lost, presumably with all 6 crewmen who were never seen again, possibly in the area of Green Bay on Lake Michigan.  Lost on its maiden voyage, the perils facing the only sailing vessel on the Upper Great Lakes at the time were enormous, with uncharted waters, rocks and reefs, no companion ships for possible rescue and hostile natives.  Even the building of Le Griffon was fraught with danger, as the working party La Salle sent up the Niagara River to build the ship did so in a wilderness setting where Cayuga Creek meets the Niagara River, at Cayuga Island, with hostile Iroquois Native Tribes in the area.  These shipbuilders had to bring all their tools and materials with them, using a small sailing boat of about 10 tons for transport.  Some supplies were lost in transit, and some of the men had to make their way back on foot over frozen streams to Fort Frontenac, a harrowing journey in its own right.  Building the little ship was difficult, an understatement to say the least.  The men on the working party nearly mutinied, and a plot to destroy the vessel and kill the Frenchmen was foiled by launching Le Griffon ahead of schedule.

In 2004, the wreckage of Le Griffon was supposedly discovered off Fairport, Michigan, but the authenticity of the discovery is debatable.  The wooden bowsprit from Le Griffon was dated by some experts as “hundreds of years old” while others that examined the relic claim the item is only a fishing net stake from the 19th Century.  As is often the case with shipwrecks or possible shipwrecks, the rights of salvage and ownership of the relics found are being contested in court by the State of Michigan, the United States Government, and the Government of France.  As by some accounts the first ship lost on the Great Lakes, the wreck of Le Griffon has become a sort of “Holy Grail” for treasure seekers. 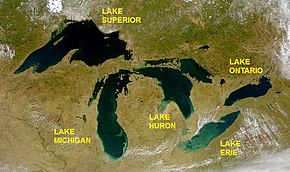 Was Le Griffon lost in bad storm?  Was she lost due to deficiencies in construction because of the harsh conditions in which she was built?  Did Native Americans overwhelm and murder the crew?  Or perhaps were the culprits Jesuits that sought her destruction?  La Salle himself is said to suspect the crew of the ship deliberately sank her and absconded with her cargo of valuable furs, but there is no evidence of this scenario.  In fact, there is no real evidence supporting any of the proposed scenarios regarding the fate of Le Griffon.  Several sites have been claimed as possible wreck sites of this historic vessel in Lake Huron as well as Lake Michigan, but so far none have definitively been identified as the true wreck of Le Griffon.

As is the case with much of History, speculation and conjecture may be all we ever really have about the fate of Le Griffon.  What do you think happened?

If you liked this article and would like to receive notification of new articles, please feel welcome to subscribe to History and Headlines by liking us on Facebook. Your readership is much appreciated!

Kohl and Forsberg. The wreck of the Griffon. Seawolf Communications, 2015.

The featured image in this article, a woodcut by Father Louis Hennepin of Le Griffon, is in the public domain in its country of origin and other countries and areas where the copyright term is the author’s life plus 100 years or fewer.