On August 4, 70 A.D., the Romans punished the rebellious Jews by destroying the Second Temple on the Temple Mount in Jerusalem.  In 66 A.D., the Jews had rebelled against Roman rule, and four years later, the Romans retook Jerusalem.

(See our other articles about the Second Temple, Jerusalem, and Israel.  These links are just some of our Jerusalem and Israel related articles.  For more articles, use the search function.)

The original temple was built around 1000 B.C. and was known as Solomon’s Temple.  After it was destroyed around 586 B.C., construction of the Second Temple began about 538 B.C. and was completed by 516 B.C. 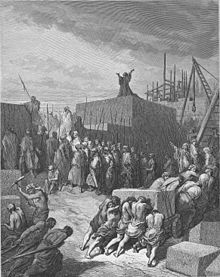 The Second Temple underwent reconstruction under Herod the Great in the 1st century (around 18 B.C.) and was often referred to as Herod’s Temple. Since the destruction of the nearly 600-year-old Second Temple, the Third Temple prophesied by Ezekiel has not yet been built.  Instead the site on Temple Mount is occupied by the Islamic Mosque known as the “Dome of the Rock” which was built in 691 A.D.

The site of the Jewish temples and the Dome of the Rock is based on the rock (Foundation Stone) that Abraham is said to have prepared for the sacrifice of his son, and the same rock is the one that Muhammad is supposed to have ascended into heaven from.  The Foundation Stone is located immediately next to a hole in the ground with stone steps leading to a cavern known as the “Well of Souls.”  Some clerics believe the Ark of the Covenant was kept at the Temple Mount and may be buried there.  Sacred to Christians, Jews and Muslims, the construction of a Third Temple on the same site is considered to be a prerequisite for the onset of Armageddon. 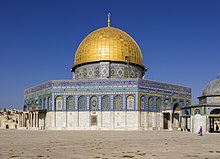 The Dome of the Rock (Arabic: مسجد قبة الصخرة‎, Hebrew: כיפת הסלע), on the Temple Mount in the Old City of Jerusalem.  Photograph by Andrew Shiva / Wikipedia / CC BY-SA 4.0.

Considering the likelihood of massive Holy War by Islam against any people that tear down the Dome of the Rock, such an action could well preface a terrible war.  With all 3 of the major Western religions (Christianity, Judaism, and Islam) claiming common roots, it seems rather unfortunate that a place so holy to all 3 might one day be ground zero for a possible apocalyptic war.  Feel free to share your thoughts on the subject. 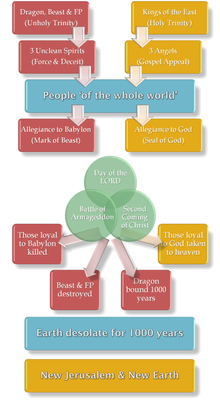 Seventh-day Adventist understanding of Revelation 13-22.  The original uploader was 718 Bot at English Wikipedia.  The bot claimed Jdjackson as the author.

Question for students (and subscribers): Should a Third Temple be built?  Please let us know in the comments section below this article.

Goldhill, Simon.  The Temple of Jerusalem (Wonders of the World).  Harvard University Press, 2005.