For the next 107 years, Oldsmobile was known as a company that made upscale, comfortable cars and even produced some “muscle” cars along the way.  Officially called Olds Automobiles, the name was quickly shorted to Oldsmobile.

Born in Geneva, Ohio in 1864, Ransom Eli Olds established the Olds Motor Works in Lansing, Michigan.  He later moved the base of his operations to Detroit (which seemed like the thing to do back then).

The first mass-produced Oldsmobile and first mass-produced car ever was the 1901 Curved Dash Oldsmobile.  Oddly enough, Olds had a falling out with his partners and left Oldsmobile in 1904 to start another company, Reo Motor Car Company (R-E-O= Ransom E. Olds, clever boy!).  Meanwhile, Oldsmobile did not prosper without its founder and was bought out by General Motors in 1908, and that is where Oldsmobile stayed until GM shut the brand down in 2004.

Noteworthy cars included the “88” model which, in 1949, was the first Oldsmobile to feature the “Rocket V-8” engine series, making it a top performer in the sedan market.

Later, in 1961, Oldsmobile introduced the Cutlass model of the “F-85,” and this model became the top-selling American car for several years in the 1970s and 80s.  In the 1980’s, however, sales tapered off dramatically, signaling the beginning of the end for Oldsmobile.  Consumers were beginning to buy Japanese cars, and all GM-run brands were beginning to blur into generic copies of each other (or so it seemed). 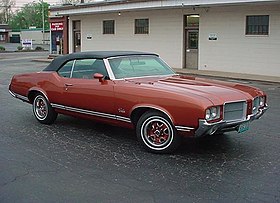 In 1992 GM refuted a rumor that Oldsmobile was about to be shut down as a brand, and the company made it to its 100 birthday in 1997.  By 2004, General Motors had become over bloated and began looking for ways to rid itself of excess baggage, with the focus being on dropping Oldsmobile.  And so, after 107 years, the oldest car company in the U.S. was shut down.  GM also shut down its Saturn and Pontiac divisions, whereas Chrysler shut down Plymouth, and Ford shut down Mercury.

All those American nameplates went the way of the dinosaurs (along with Packard, Studebaker, Hudson, Kaiser, Nash, American Motors and Checker in the 1950s through 70s).  What was primarily left for the U.S. car buyer was an ever-increasing amount of foreign cars to choose from.  When Oldsmobile was pulled from the market, it felt like a piece of America had died with it.  RIP Olds, you are still driving in our dreams. 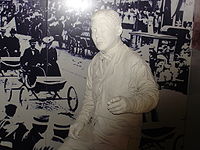 Wax figure of Ransom E. Olds at the Automotive Hall of Fame.  Photograph by Karrmann at English Wikipedia.

Question for students (and subscribers): Have you ever been in an Oldsmobile?  Please let us know in the comments section below this article.

The featured image in this article, a photograph from the New York Public Library of an Olds Motor Vehicle Company 1897 Model, was taken from Flickr‘s The Commons. The uploading organization may have various reasons for determining that no known copyright restrictions exist, such as:

More information can be found at https://flickr.com/commons/usage/.  This image was originally posted to Flickr by New York Public Library at https://flickr.com/photos/32951986@N05/3592495373. It was reviewed on 26 November 2016 by FlickreviewR and was confirmed to be licensed under the terms of the No known copyright restrictions.

For another event that happened on August 21, please see the History and Headlines article: “10 Notorious Thefts, Heists and Robberies.”