On April 12, 1999, President William Jefferson (“Bill” or “Slick Willie” if you will) Clinton was cited for Contempt of Court for lying in a civil suit brought against him by Paula Jones alleging sexual harassment for unwanted sexual advances. The suit had been thrown out by the presiding judge but was reinstated when President Clinton’s admission of having a sexual affair with White House intern Monica Lewinski became public. The lie referenced in the Contempt ruling referred to a deposition in the lawsuit in which Clinton denied having sexual relations with Lewinsky.

The impeachment of President Clinton by the House of Representatives and ensuing trial by the United States Senate (vote was 50-50 on guilt/acquittal, and 67 guilty votes are needed for a conviction) dominated the news, but within the entire spectacle of tawdry accusations and admissions, the Paula Jones case could easily take a back seat. 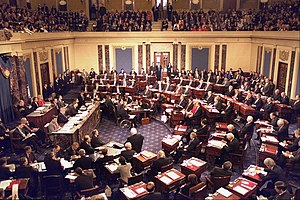 Floor proceedings of the U.S. Senate during the trial of President Bill Clinton in 1999, Chief Justice William Rehnquist presiding. House managers are seated beside the quarter-circular tables on the left and the president’s personal counsel on the right.

When the Monica Lewinsky affair became public, the judge reinstated the case that had been previously thrown out, partially because Jones had described a certain “deformity” on Clinton’s penis that was found by investigators not to be true. Clinton was disbarred from practicing law and paid Jones an out of court settlement of $850,000, almost all of which went to her lawyers as legal fees. Jones had alleged Clinton had made the sexual advances toward her while exposing his private parts in 1991 while in Clinton’s hotel room in Little Rock. Jones did not complain until filing a lawsuit in 1994. Clinton claimed the settlement was reached not because he was guilty of the sexual harassment alleged in the suit, but because of pressing issues concerning his impending impeachment trial.

Would Bill Clinton have survived politically and legally in today’s era of “Post-Weinstein” “Me too?” He had admitted to having adulterous relations with 2 women, Monica Lewinsky and Gennifer Flowers, and several more women had come forward with reports of having had consensual sexual affairs with Bill Clinton. In addition to the sexual harassment complaint by Jones, one woman had accused Clinton of a rape in 1978 and another complained that the President had “groped” her in 1993.

Clinton with Lewinsky in February 1997

Bill Clinton survived the impeachment process and finished his second term as President, probably capable of winning a third term had it been legal at the time! It seems doubtful in today’s atmosphere that Clinton could have survived such events politically had the accusations and revelations been made in recent days.

Question for students (and subscribers): Do you believe Bill Clinton really did sexually harass Paula Jones? Do you believe he really did grope a woman while he was President and rape another in 1978? Give us your opinions about the accusations against Bill Clinton, and feel free to speculate as to what would transpire had the same accusations been made against him today, in the comments section below this article.

Note: While President Clinton was going through the political, legal, and public relations ordeal concerning his alleged sexual adventures, he was receiving “guidance” from Rev. Jesse Jackson, the Civil Rights activist preacher, who was himself engaging in extra-marital relations at the time!

Maraniss, David. First in His Class: A Biography Of Bill Clinton. Simon & Schuster, 1996.