Tuesday, August 4
Trending
You are at:Home»July»July 31»10 Traditional Parts of Life That No Longer Exist (Or Barely!)

On July 31, 1970, the British Royal Navy experienced one of the darkest days in their long and glorious history, Black Tot Day.  This episode was the last day the Royal Navy would follow the long tradition of supplying a daily drink of rum to their sailors.  Many military and civilian traditions have fallen by the wayside, some with good riddance, some longingly missed.  Many of these traditions were written down as official policy, and others were just things people usually did.  Some ended with a clear cut finale, and others faded away.  Here we list 10 of those things that used to be a big or noticeable part of life.

As stated above, this cherished tradition went the way of the Dodo in 1970.  In 1655, the Royal Navy switched from a ration of 1 gallon of beer per man per day to a half pint of rum, as beer did not keep very well in non-refrigerated ships.  In 1740 the rum ration was mixed with water and served in 2 portions to prevent drunkenness (the water-rum mix could not be hoarded, it would spoil).  In 1824 the ration was cut to a fourth of a pint.  In 1850 this tradition was again cut in half, down to an eighth of a pint, and officers were eliminated from the ration in 1881.  The Australian Navy had already eliminated the rum ration in 1921, and the Canadian Navy followed suit in 1972.  The last holdout among Commonwealth navies was the New Zealand Navy, which discontinued the practice in 1990.

For centuries, the Catholic mass was said in Latin, so Catholics that spoke any language would be familiar with mass no matter where they were.  In 1967 permission was given for mass to be celebrated in the local languages.  Many older Catholics claim to miss this part of church.  At some places and times, the Latin Mass is still celebrated, but the norm is to use the local vernacular. 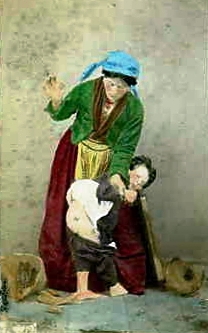 Both in the home and in schools the use of corporal punishment is a fraction of what it once was.  In the past, slapping or spanking an errant child was not given a second thought.  Nuns in Catholic schools terrified kids with a ruler across the knuckles, and most teachers kept a menacing wooden paddle hanging in the classroom to remind pupils of the consequences of misbehavior.  Today, things have changed so much that kids do not hesitate to call the police if their parents slap or spank them.  Although still legally permitted in the United States of America, striking a child is greatly frowned upon today (even banned in some European countries) and extreme care must be taken to avoid being charged with domestic violence. Were you spanked as a child? Do you spank your children? In either case, how? Do you consider spanking an appropriate form of child discipline? Please let us know in the comments.

Closely related to #6, mothers of children often cannot stay home, raise the kids and keep the house.  Single mothers certainly must make a living, and many women today are the primary earner in the family.  Even more frequently, the income from mom’s job is essential to the family budget and both parents work.  From Rosie the Riveter in World War II, to female CEO’s, Mayors, Senators, female participation in the military (combat roles), and the distinct possibility that a woman may be our next president, it can clearly be seen the traditional role of women has changed in a big way.

Not only did the institution of marriage take a major weakening in the late 20th Century with “living together” replacing formal marriage for many couples, but we are now experiencing a groundswell of support for marriage to be expanded to members of the same sex.  At this time 16 countries recognize same sex marriage, and more have areas where it is allowed.  In the US, 21 states have recognized same-sex marriage, and many more are either contemplating legislation or are in litigation over laws forbidding it.  (Note: Since this list was written, in 2015, the US Supreme Court made same sex marriage legal in the entire United States.  By 2018 about 25 countries allow same sex marriages to be performed and another few recognize those marriages.)  Another change in the norm is serial marriage, people getting divorced and remarried as if they were trading in a used car for a new one.  Divorce is now legal in every country except the Philippines (and Vatican City if you call that a country).  Married women today frequently do not take the last name of their husband, either keeping their maiden name or making a hyphenated version of both names.

The ordeals that new members of various school organizations used to go through were an accepted part of academic life.  Fraternities, sororities, athletic teams, clubs, marching bands, military academies, all sorts of school organizations had traditions of putting new members through hell in order to cement the bonds of camaraderie.  Unfortunately, these hijinks had led to many cases of physical injury and death, causing anti-hazing rules and laws to be passed.  Initiation ceremonies must now be carefully regulated to prevent injuries or extreme humiliation, and especially non-compliance with the rules.

In the 1920’s through the 1940’s radios became common enough that most families would gather around and listen to radio shows the way they later gathered to watch the television.  Radio dramas such as The Shadow appeared as did other sorts of radio shows that developed loyal audiences.  With television gradually taking over after World War II, by 1960 radio shows were a minor part of Americana. 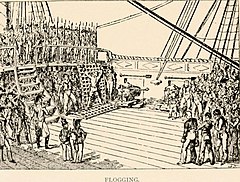 A common military punishment used to be whipping the offending sailor or soldier, with “flogging” generally meaning the use of a “cat’o’nine tails.”  The US Navy ended flogging in 1850, and the US Army ended flogging in 1861.  The Royal Navy ended the practice in 1879.  The permitted amount of lashes in some cases was as many as 1000, a number sure to result in death or disability.

For most of the 20th Century women had long hair and men had short hair.  Not only was that the accepted norm, but in school this was strictly enforced.  Boys with long hair were either sent home or given a haircut on the spot by male teachers.  Men with shaved heads were almost considered freaks.  Now of course, it is perfectly normal for men to have shaved heads, traditional type haircuts or long flowing locks.  Women have all the old hairstyles and now are accepted without a second glance if their hair is cropped short or even shaved.

Back in the day, women wore dresses and skirts, especially to work, school or church.  Until about 1970 it was required for girls to wear skirts or dresses no matter how cold it got, and they had to reach to the knee.  Boys were required to wear dress type pants (no blue jeans) and were not allowed to wear tennis shoes or work shoes in school.  Shirts had to have a collar (button down or polo type shirts) and no T-shirts were allowed.  Laws against “cross dressing” were on the books in most states or cities  Men could have tattoos (but not too many), but women with tattoos were considered loose women or freaks. Any man with an earring before the mid-1970’s was usually assumed to be a homosexual.  Nurses wore traditional caps readily identifying them until the late 1970’s.  Even police officers are now often seen in non-traditional uniforms such as duty boots, baseball style hats, and cargo pants.  Around 1970, school dress codes were shaken up by a Supreme Court decision, and schools have to now justify dress codes using some logic other than “tradition.”  Teachers and professors used to dress semi-formally, with men usually wearing a suit and tie, even in elementary schools.  You still may see this dress code in some colleges, but seldom elsewhere, and in some colleges and universities professors may be seen in gym clothes!

Question for students (and subscribers): What items would you include?  (Perhaps smoking areas in restaurants and airplanes?)  What “normal” things today will become only memories tomorrow?  (Separate men’s and women’s bathrooms?  Men’s and women’s sports become forcibly coed?  Censorship of nudity and language that has greatly lessened to become a thing of the past?)  Please let us know in the comments section below this article.