On April 30, 1961, the Soviet Navy commissioned their first nuclear armed submarine, the K-19, later made famous in the 2002 movie, K-19: The Widowmaker.  Other ships have had movie titles featuring their name, and we have 10 prominent ones listed here.

A silent film about the revolt on board the battleship in 1905 that eventually led to the Russian revolution and the overthrow of the Czar.  Considered a propaganda film, it was named by the Brussels World Fair in 1958 as the greatest movie of all time.  Many modern movies are said to have been influenced by this film, and the film was released on DVD in 2007.

This made for British television film tells the story of the British ocean liner Laconia that was sunk by German submarine U-156 in 1942.  The ship was carrying POW’s and civilians, and when the U-boat’s captain realized that, he disobeyed orders and set about trying to rescue survivors. An Italian submarine and three other U-boats assisted with saving survivors, only to be attacked by an American airplane.  This incident caused the German high command to issue the Laconia Order to refrain from rescuing any survivors of allied ships. U-156 along with the captain and entire crew were lost later in the war.

An animated silent movie documentary about the 1915 sinking of the Cunard Line ocean liner by a German U-boat, this film was only 12 minutes long. At the time, the 12 minute film was advertised as the longest animated film and is the oldest animated documentary that survives to this day.  Critics called it propaganda.

A Norwegian film about Norwegian ethnographer Thor Heyerdahl, who set out on a balsa wood raft in 1947 from South America heading for Polynesia.  The Kon-Tiki made the journey with its crew safely arriving, proving that it was indeed possible for South Americans to have traveled to Polynesia, possibly populating those islands.  A 1950 documentary film, Kon-Tiki, made by Heyerdahl won the Oscar for best documentary in 1951. The 2012 film was also made in the Norwegian language.

The second of 3 great movies made about a British ship on a mission to bring breadfruit plants from Polynesia to the Caribbean.  Although being nominated for 7 Oscars (winning none) the movie lost money because of production delays running up costs. Starring Trevor Howard as Captain Bligh and Marlon Brando as Fletcher Christian.  The 1935 film starred Charles Laughton and Clark Gable, and the 1984 version, The Bounty, starred Anthony Hopkins and Mel Gibson. A ll are based on the real life HMS Bounty that really did suffer a mutiny.

The film is about a real U-Boat captured by the allies along with its Enigma code machine, but in real life the submarine was actually the U-110 and it was captured by a British ship, not American as the movie depicts.  Still, it is a decent movie and the basic idea is the same.

The second movie made about the 1985 Achille Lauro hijacking by Palestinian terrorists, this is the better one. It was filmed on board the actual Achille Lauro. (Note: None of the various Titanic movies were filmed on the Titanic!) The ship caught fire in 1994 and sank.

Named after the patrol/torpedo (PT) boat commanded by John F. Kennedy during World War II, the movie dwells on Kennedy’s heroic actions and glosses over his negligence in allowing his ship to get run over, cut in half, and sunk by a Japanese destroyer.  Real life pretty much went that way, too. 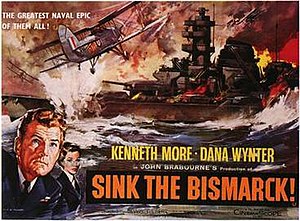 A British made production, this film has nothing to do with dunking a filled donut (known as a Bismarck) in your coffee. The mighty German battleship of World War II was heavily armed and armored and for a while was the main focus of the British war effort in May of 1941. The movie plays almost like a documentary, with plenty of attention paid to the plotting, strategy and hand wringing going on back at naval headquarters while the British fleet searched for the Bismarck, eventually catching and sinking her. This film was the inspiration for the Johnny Horton hit song, Sink the Bismark (their misspelling).

Although 8 major motion pictures have dramatized the famous doomed ship, and of course numerous documentaries, the top billing goes to the James Cameron production of 1997 which cost $200 million to produce, but then stood as the richest grossing movie of all time for 12 years. Considering the audience knows what happens ahead of time, the Titanic movies have been quite successful. A movie about the Titanic’s sister ship, Britannic was made in 2000 (the Britannic sank during World War I in 1916).

Question for students (and subscribers): Feel free to nominate any ships missing from the list that have had movies bearing their name.  Please let us know in the comments section below this article.

Otfinoski, Steven.  The Sinking of the Lusitania: An Interactive History Adventure (You Choose: History).  Capstone Press, 2014.