Monday, August 3
Trending
You are at:Home»Society»Religion»Who Was the First American Born Catholic Saint?

On September 14, 1975, Elizabeth Ann Seton was canonized by Pope Paul VI, thus she became the first person born in what is now the United States to be granted sainthood.  Born in New York, on August 28, 1774, she just missed being born in the United States, but more importantly, was not even born into a Catholic family!  Seton was also the founder of the first religious order for nuns in America, the Sisters of Charity.

Born Elizabeth Ann Bayley to a French Huguenot family, her father had been a prominent doctor in New York, and both her parents were descended from very early settlers of the New World.  The doctor served as Chief Health Officer for the Port of New York and later as a professor at Columbia.  Her mother was descended from the daughter of a priest of the Church of England, so religion ran in the family.  Elizabeth was raised in the Church of England, that later became the Episcopalian Church.

Saint Elizabeth Ann Seton (1774-1821) aka Mother Seton, the first native born American to be canonized by the Roman Catholic Church

After Elizabeth’s mother died when Elizabeth was only 3 years old and her father remarried, several step-siblings were born, but the second marriage did not work out and the new Bayley couple ended up separating.  Prior to the separation, the new mom (Charlotte), imbued a sense of charity in Elizabeth by taking the girl on trips to the needy people in the area, providing food and goods as needed.  Charlotte also encouraged the religious leanings of Elizabeth.

Elizabeth was off to live with her father’s brother and according to her writings of the time was somewhat depressed about the disintegration of her parents’ marriage.  She also wrote of her religious ideas.  By the age of 19, Elizabeth was ready for marriage and wedded a well-to-do 25 year old business heir, William Magee Seton in an Episcopal ceremony.  The couple moved to a home on Wall Street in New York City, and Elizabeth was active in the local Episcopal church, continuing the charitable activity taught to her by her step-mother, including involvement in The Society for the Relief of Poor Widows with Small Children. 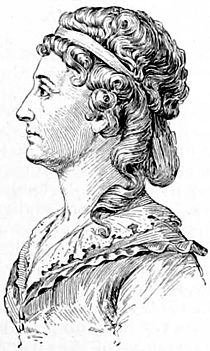 Elizabeth’s family grew with the birth of 5 children, and when her father-in-law died Elizabeth and William took in 6 of William’s younger siblings.  Meanwhile, the death of William’s father in 1798 saw the start of financial reversals for the family.  The new 19th Century would bring a downturn in fortunes.  The loss of ships in which William had an interest led to financial ruin.  William, who had long suffered from tuberculosis, succumbed to the disease in 1803, leaving Elizabeth a widow at the age of 29.  It was then that Elizabeth was introduced to Catholicism by Italian business associates and friends of her late husband.  She converted to the Roman Catholic religion in 1805, a fateful move.  Her confirmation came in 1806, at a service by Bishop John Carroll, a Jesuit, then the only Catholic bishop in America and the founder of Georgetown University and the namesake of the prestigious John Carroll University in Suburban Cleveland, Ohio.

Elizabeth started a school for girls, a common career path for widows, but as word of her religious conversion spread, Protestant parents took their girls out of Elizabeth’s academy.  Suffering under severe social discrimination due to her Catholic faith, Elizabeth was on the verge of moving to Canada when she was convinced by a French priest, Abbé Louis William Valentine Dubourg, to move to Emmitsburg, Maryland, where the  Sulpicians (a Catholic order) were setting up a seminary.  She made the move in 1809, and a year later founded Saint Joseph’s Academy and Free School for girls.  Her academic endeavor became the basis for parochial Catholic schools in the United States.  Elizabeth also established the Sisters of Charity of St. Joseph’s, dedicated to helping poor children, the first such religious congregation of sisters in America.  Elizabeth became known as “Mother Seton” in honor of her leadership of the new order.

Elizabeth spent the rest of her short life committed to her order and helping poor children, and died at the age of 46 in 1821.  Her creation, the Sisters of Charity, continued and expanded, and in 1850 merged with the Daughters of Charity of St. Vincent de Paul, an order of sisters in France.  In 1856, Bishop James Roosevelt Bayley, a relative of both Elizabeth and future President Teddy Roosevelt, founded Seton Hall University in New Jersey, in honor of Elizabeth.  Other schools and parishes also bear her name.

Beatified by Pope John XXIII on March 17, 1963, the Catholic Church canonized Elizabeth in 1975, making her the first American born Catholic saint.  Her feast day is January 4th.  She is a patron saint of widows and seafarers. 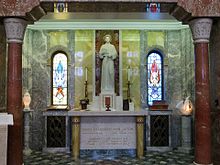 Question for students (and subscribers): Do you have a favorite saint or religious figure?  Please let us know in the comments section below this article.

The featured image in this article, a photograph by Wusel007 of an Elizabeth Ann Seton shrine sign, is licensed under the Creative Commons Attribution-Share Alike 3.0 Unported license.