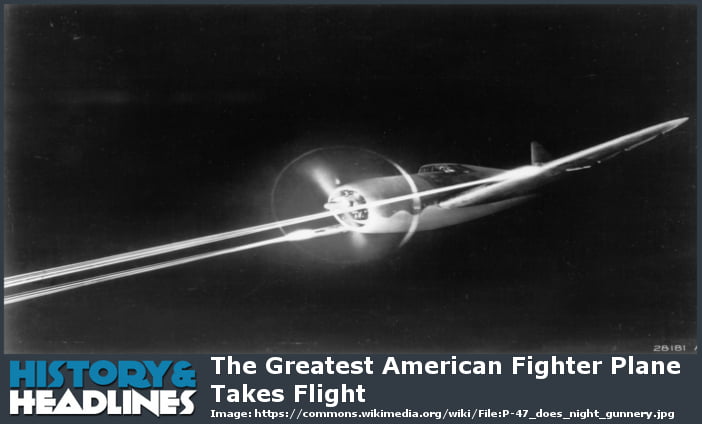 On May 6, 1941, the Republic P-47 Thunderbolt made its first flight, a maiden flight that would eventually see over 16,000 of the mighty fighter aircraft built, more than any other fighter aircraft produced by the United States in all of aviation history.  (In fact, among American warplanes, only the Consolidated B-24 Liberator (a bomber) was built in greater numbers, over 18,000 produced.)  We have previously discussed great airplanes, including great fighter planes, and the P-47 has a rather large contingent of supporters as the Greatest of All Time (GOAT) when it comes to fighter aircraft, especially American fighter planes.  Big, powerful, heavily armed and fast, the Thunderbolt might be the most rugged piston engine fighter ever produced anywhere.  (Click the link for a bunch of our articles about great fighter planes!)

If the British Spitfire (5000 pounds empty weight) and German Bf-109 (also about 5000 pounds empty) could be considered rapiers, small, lightweight and nimble, the Thunderbolt could be thought of as a cutlass, heavy, rugged and brutal.  Weighing in at 10,000 pounds empty, the P-47 was double the weight of contemporary fighter planes, though still a single engine, single pilot fighter.  To go with its bulk, the Thunderbolt was heavily armed with a suite of 8 x .50 caliber machine guns, enough firepower to shred enemy airplanes and ground targets alike.  Powered by a large and immensely powerful Pratt & Whitney R-2800-59B, a radial engine that produced an astounding 2600 horsepower (in the P-47D-30 model), the Thunderbolt did move like lightening, reaching a top speed of 433 mph in the most produced version (P-47D), faster than contemporary British and German fighters.  Despite its bulk, the P-47 could almost match the Bf-109 in rate of climb and could out-dive any airplane in the sky over Europe during World War II.

Although not the long distance champion of fighter planes, the P-47 when introduced did have more range than any other single seat fighter in Europe (800 miles on internal fuel), about double that of a Spitfire or Bf-109.  The addition of external drop tanks added to the long range capability, and the final version, the P-47N, increased internal fuel capacity from 370 to 570 gallons, along with another 600 gallons of high octane avgas in drop tanks!  Intended to escort B-29 bombers on missions over Japan, the P-47N had a combat radius of over 1000 miles to go with its blistering speed of 467 mph!  (The 2800 horsepower provided by the massive P&W radial engine in its latest iteration overcame the weight and bulk of the Thunderbolt in a display of pure power.)  Over 2000 of the P-47N models were built but were not needed for their intended mission once the US conquered Iwo Jima which gave P-51 Mustangs a base from which to escort B-29 missions over Japan.  Even the P-47D models eventually escorted American bombers all the way into Germany as increases in fuel load were integrated into the airframe.

Having a radial type engine (18 big cylinders) meant the P-47 did not need a radiator as the engine was air cooled.  On piston engine aircraft such as the Mustang and almost all European fighters (except the FW-190), the water cooled engines were susceptible to damage to the radiator, and merely a single bullet putting a hole in the radiator or a water line could take down a water cooled engine fighter.  The P-47 not only had hundreds of pounds of armor to protect the pilot and vital systems, the engine itself was legendary for the damage it could take and continue operating.  Even with a cylinder or 2 blown right off the engine the P-47 could often continue to fly under its own power.  No other fighter plane of World War II had that sort of ruggedness.  (Note: The Soviet Il-2 Sturmovik, was called the “Flying Tank” and was indeed rugged but was a 2 person crew light bomber/ground attack aircraft, not a fighter.)

The ability to withstand damage from enemy fire while keeping its pilot safe meant the P-47 was often victorious in air to air combat even when the pilot made an initial mistake.  This incredible ruggedness also translated into a sturdy ground attack capability, a mission that was the most dangerous of all fighter plane missions of World War II (for the Americans),  Those 8 big machine guns provided massively effective strafing ability, and the P-47 was often equipped with bombs and/or rockets to enhance its ground attack punch even more, especially as the P-51 Mustang took over much of the bomber escort role and the P-47 became the primary fighter-bomber of the Americans in Europe.  The scorecard amassed by P-47’s in the ground attack mode is almost unbelievable: 6000 tanks and other armored vehicles, 9000 locomotives, 86,000 railway cars, and 68,000 trucks destroyed!  Not to mention buildings and troop formations attacked, and airplanes destroyed on the ground.

Despite the better press attained by the P-51 Mustang, much of it richly deserved, the P-47 is credited with downing 3752 enemy airplanes in Europe against the loss of 3499 Thunderbolts to all causes, mostly ground fire.  The greatest American fighter ace of the European Theater, Lieutenant Colonel Francis S. Gabreski, tallied 28 air to air kills in the P-47.  Runner up was Captain Robert Johnson with 27 aerial kills.

Oddly enough, at least to this author, the P-47 was taken out of front line service by the Korean War and the P-51 (now called F-51) became the primary piston engine fighter bomber of that conflict, even though the Mustang was much more susceptible to catastrophic damage from ground fire.  (The Marines used the F4U Corsair in that role, a plane using the same engine as the P-47.  The Corsair performed admirably.)  By 1953 the last of the Thunderbolts in US Air Force service were retired.  Other countries continued to use the mighty Republic warbird until the last of their type were retired in 1966 in Peru.  A handful of P-47’s are still airworthy in private hands.

The Republic P-47 Thunderbolt did not have “the look” that fighter pilots dream about, the sleek shark-like appearance that seems to scream “Performance!” at the observer.  Yet, with its immensely powerful engine and 8 heavy .50 caliber machine guns (other US fighters generally had 6 x .50 caliber machine guns) this monstrosity outflew the majority of its opponents and brought back pilots that had no right to think they would survive.  The heaviest single engine piston powered fighter of all time, the P-47 may well be the Heavyweight Champion of World War II fighter planes.  In fact, in recognition of the incredible durability and firepower of the P-47, when the US Air Force developed the A-10 tank busting ground attack jet with a massively powerful 30mm Gatling gun type rotary cannon and titanium armor, they named it the Thunderbolt II in honor of the P-47.

Question for students (and subscribers): What is your favorite fighter plane?  Please let us know in the comments section below this article.

The featured image in this article, a USAF Photograph of a P-47 doing night gunnery, is a work of a U.S. Air Force Airman or employee, taken or made as part of that person’s official duties. As a work of the U.S. federal government, the image or file is in the public domain in the United States.