Wednesday, February 26
Trending
You are at:Home»January»January 14»Some Notable Iranian Americans

On January 14, 2020, while the world continues to digest the fallout of the US drone strike that killed Iranian Major General Qasem Soleimani on January 3, 2020 and the subsequent missile attack from Iran against an American base in Iraq, as well as the tragedy of the Iranian military accidentally shooting down a civilian airliner mistakenly thought to be an incoming American attack on Iran, we prefer to look at the more positive side of American-Iranian relations.  Specifically, we want to introduce our readers to some of the notable Iranian Americans that help make the United States the melting pot of nationalities.  Like all ethnicities and nationalities, Iran has also contributed to the human wealth of the American population.  Please also see our other articles relating to Iran as well as our YouTube videos.

Rather than just picking a few to name, we will merely tell you that over 500 Iranian American professors are employed at many of the finest American institutes of higher learning.  In fact, Iranian Americans are particularly well educated, and the Iranian American population has the highest percentage of people holding a Masters degree of ALL the ethnic populations in the US!

Fortune 500 companies report that of the American companies with assets valued over $200 million, there are over 500 Iranian Americans occupying senior positions within the companies.  Many of these companies are the high tech, modern type of computer related businesses such as YouTube, Google, eBay, Oracle, Expedia and Twitter.  Many of these people were instrumental in founding the companies they represent.

Born in Tehran in 1961, Matt came to the US as a young child and  grew up American, attending public schools in New Jersey.  He attended Cleveland State University in Cleveland, Ohio from 1981 to 1984 (Note: this author is a graduate of Cleveland State!).  A Greco-Roman style wrestler, Matt made the US Olympic team and competed at Barcelona in 1992, and in 1996 he advanced all the way to the Heavyweight Championship bout against Russian legend Aleksandr Karelin, widely considered the greatest wrestler of all time, boasting 3 Olympic Gold Medals and a single Olympic Silver Medal.  Matt took the great Russian into overtime before losing 1-0, settling for the Silver Medal.  He has also won the World Championships Silver Medal in 1991 and 1998, and taken Bronze in 1995.  Matt was the most accomplished American Greco-Roman wrestler in history.

Amanpour in 2015.  Photograph by Amanpourtátk.

If you ever watch CNN you have certainly seen this London, England born Iranian American woman reporting on international political news.  She is the daughter of an Iranian man and a Catholic British woman, and was raised Catholic.  She got her college education in the USA, at the University of Rhode Island where she studied journalism and graduated summa cum laude.  Now 62 years old, Christiane is a respected news veteran and has the distinction of being a Commander of the Most Excellent Order of the British Empire.  She married a Jewish American diplomat in 1998 (divorced 2018) and has one son.  She has lived her adult life in New York and in London.  Christiane has such an impressive array of awards and other forms of recognition that it is not prudent to list them all here.  Suffice to say, it is a long list!  She has been named by Forbes magazine as one of “The World’s 100 Most Powerful Women.”

Despite “only” having a BS degree, this physicist is renowned for inventing the “Afshar Experiment,” a project he worked on while employed by the Institute for Radiation-Induced Mass Studies (IRIMS) in Boston.  Born in Iran in 1971, he has been a visiting professor at Rowan University (New Jersey) since 2004.  Along with his academic and research credentials, Afshar also owns several patents and is the CEO of a start-up company, Immerz Inc.  He is also known in scientific circles as a skeptic about the Higgs boson project, and has been voted the 8th Smartest Person Alive (2014) by Super Scholar. 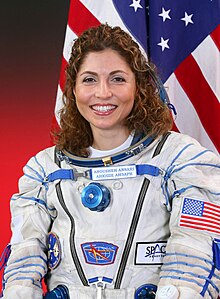 Born in Iran in 1966 as Anousheh Raissyan, she came to the US with her family in 1984, just in time to attend George Mason University (BS) and then George Washington University (MS).  She worked for MCI and then married, with her husband being a co-founder of Telecom Technologies Inc.  The company was acquired by a larger telecom company, Sonus Networks, Inc. in 2001, with Anousheh becoming an executive in Sonus.  Trained as a back-up cosmonaut for a Russian Soyuz flight to the International Space Station, Ansari was given the historic opportunity to become the first person of Iranian descent to blast off into space when the other proposed cosmonaut had to back out for medical reasons.  On September 18, 2006, upon liftoff from the launch pad in Kazakhstan she became only the 4th “space tourist,” a non-scientific member of a space bound crew that had bought their way into space, and was the first female such space tourist.  Touchdown in Kazakhstan on September 29, 2006 ended her historic flight.  Despite her status as a “tourist,” Ansari actually performed useful scientific experiments during her flight.  Ansari is also a philanthropist and an inspiration to girls everywhere. 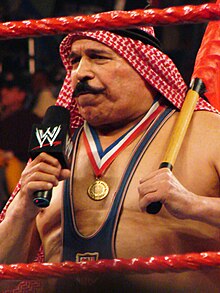 Born in Tehran in 1942, Vaziri competed in the 1968 Olympics for Iran in the sport of Greco-Roman Wrestling.  He then moved to the United States and worked as an assistant coach for the US wrestling team.  He also won the AAU Gold Medal in Greco-Roman Wrestling at the 180.5 pound class in 1971.  He became a pro wrestler in 1972, adopting a “bad guy” persona with various vaguely Arabic or Middle Eastern sounding names.  By about the time of the Iranian Revolution he settled on the Iron Sheik name and went on to a lucrative career as a famous pro wrestler.

Question for students (and subscribers): Please feel free to mention other prominent or notable Iranian Americans we do not include in our brief list in the comments section below this article.

The featured image in this article, a photograph by PersianDutchNetwork of Max Amini, a Persian American stand up comedian, in Amsterdam in May 2015, is licensed under the Creative Commons Attribution-Share Alike 4.0 International license.