On May 4, 1970, the M-1 Garand rifles of the Ohio National Guard were used in combat; against college kids!

With the United States torn by the War in Vietnam, protests at college campuses became common.

President Nixon had promised to end the War in Vietnam when running for election in 1968, and by 1970 he had sent US forces into Cambodia to eliminate sanctuary for communist Vietnamese forces and disrupt communist supply lines. Many in the US saw this broken promise as an escalation of the unpopular war.

Additional fuel for the anti-war fire was the news of the My Lai massacre of innocent civilians by US soldiers and a change in how the military draft was conducted, eliminating some deferments. New protests erupted at colleges across the country, and Kent State University not far from Cleveland, Ohio was no exception. 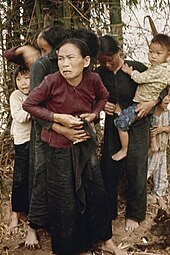 South Vietnamese women and children in Mỹ Lai before being killed in the massacre, 16 March 1968. According to court testimony, they were killed seconds after the photo was taken. The woman on the right is adjusting her blouse buttons following a sexual assault that happened before the massacre.

The fateful protests started on May 1st, with the entire Kent Police Department activated. The overwhelmed police were pelted with rocks and bottles so the mayor called the governor and requested the National Guard. On May 2nd the unrest continued and the ROTC building was set on fire before a cheering crowd of at least 1000 protesters.  Again, firemen, police, and now National Guard troops were taunted and pelted with rocks. On May 3rd the governor made an emotional and inflammatory speech comparing the students to Nazi’s and saying the protesters were the worst people in America.

On May 4th a protest rally scheduled for noon was ordered canceled by authorities and leaflets were passed around informing students not to come. About 2000 protesters came anyway, and National Guard troops armed with rifles and live ammunition were sent to clear the protesters away. After attempts to clear the crowd with tear gas failed due to windy conditions, the soldiers fixed bayonets and advanced on the jeering, rock throwing students. The soldiers, without particularly effective leadership or an effective plan did not efficiently herd the crowd away and seemed somewhat confused themselves. 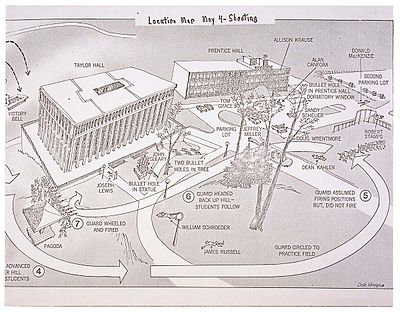 Map of the shootings

At about 12:24 pm a Guard sergeant started shooting with his .45 pistol and perhaps 29 (of the 77 soldiers) fired their rifles for a total of 67 rifle shots. What precipitated the decision to fire? Some of the Guard claimed an unknown sniper shot at them first, but this claim is hotly contested and never proven. It does have to be considered pretty normal that when in a group, if one of the group starts shooting at least some of the others are likely to start shooting as well.

Nine students were wounded and 4 were killed. An iconic photo (Pulitzer Prize winning photo) of a 14 year old runaway grieving over the body of a student flashed across the world and became the symbol of the divisive agony that the war had become. Thirteen seconds of shooting had torn apart the American public. It seemed to some the Kent State shootings were proof of a corrupt government engaged in an immoral and illegal war, while others cheered the National Guard and said “About time!” (58% of the public blamed the students for the incident.)

Students at about 900 US universities and colleges went on strikes of varying length and Kent State was closed for 6 weeks. President Nixon referred to student protesters as “bums.” Three protesters were convicted of minor offenses, and indictments against 8 Guardsmen were dismissed. A Federal lawsuit by injured and killed parties was found in favor of the State of Ohio and the National Guard, but on appeal the State of Ohio paid a total of only $675,000 to settle the suit.

The war is long over, the governor and President Nixon are dead and gone, but the scars on the American public remain.

Question for students (and subscribers): Who do you think was at fault? What could authorities have done differently? Will people ever learn to do what others with guns pointed at them tell them to do? Let us know your opinions in the comments section below this article.

Barbato, Carole A. and Laura L. Davis. This We Know: A Chronology of the Shootings at Kent State, May 1970. The Kent State University Press, 2013.

Gordon, William A. Four Dead in Ohio: Was There a Conspiracy at Kent State. North Ridge Books, 1995.

The featured image in this article, a printed map detailing the locations of structures, troop movements, bullet hole locations, and locations of casualties at the Kent State shooting of May 4, 1970, is in the public domain in the United States because it is a work prepared by an officer or employee of the United States Government as part of that person’s official duties under the terms of Title 17, Chapter 1, Section 105 of the US Code.  This media is available in the holdings of the National Archives and Records Administration, cataloged under the National Archives Identifier (NAID) 596837.