On May 16, 1770, the 14 year old Maria Antonia Josepha Johanna of the House Habsburg-Lorraine married Louis-Auguste, Dauphin (heir to the throne) of France, House of Bourbon. During her short (23 years) life to follow, Queen Marie Antoinette, as she became when Louis became King Louis XVI of France, came to symbolize the callous indifference to the plight of peasants.

At first fairly popular, the royal couple became objects of envy and scorn as financial problems hit France and the monarchs spent money like it really was theirs. Marie became known derisively as L’Autrichienne, or The Austrian Bitch. The masses thought she was throwing away their tax money on a lavish lifestyle (she was) and was secretly loyal to the Austrian Empire instead of France (not likely). 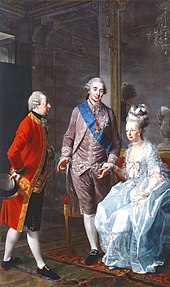 When the public outrage finally exploded into the French Revolution, Marie and Louis were taken prisoner and held at Temple Prison in 1792. Louis was led to Madame Guillotine and executed, and 8 months later, on October 16, 1793 Marie Antoinette was decapitated on the guillotine after being convicted of treason.

After the marriage ceremony, the bad omens started right away. Failing to consummate the marriage on the wedding night was considered bad form, and the couple had clearly married for political purposes, the wedding arranged by relatives before the 14 year old bride and 15 year old groom had ever met. Their marriage was not a romantic one, and they seldom slept together. Each basically did their own thing, and for Marie that was largely spending money and gambling. 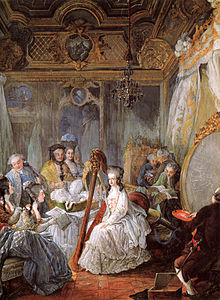 Marie was Austrian and born in the royal palace in Vienna. Her immediate predecessor as Queen of France was Maria Leszczynska, a Polish princess.  Louis was the second cousin once removed of Marie.

After a childless first 7 years of marriage during which rumors of Marie’s infidelities and Louis’ impotence breezed through French society, Marie finally gave birth, and went on to have a total of 4 children. With the birth of the first child, the tabloids of the day were filled with rumors about the paternity, although Louis never questioned it. (The scandalous rumors, lies, and half-truths in the tabloids then was as bad as now, maybe worse.)

The Royal Family of France, 1781. From left to right: The Dukes of Berry and Angoulême with their sister Mademoiselle Sophie, the Countess and Count of Artois, the King and Queen holding the Dauphin with his older sister Madame Royale holding his train, Madame Élisabeth, the Count and Countess of Provence.

In 1785 and 1786 a scandal erupted over a diamond necklace that Louis’s father (King Louis XV) had commissioned for his mistress. When the elder Louis died, the jewelers were left with no customer for the fabulously expensive necklace. Marie refused Louis’ offer to buy it for her and when con artists attempted to buy the necklace through trickery and forgery implicating Marie, the public was outraged even more than they already were becoming by that point. Marie was cleared of any wrongdoing, but the affair left a shadow on her honor. By this time known as Madame Deficit the people finally revolted in 1789, deposing the monarchy in 1792.

Numerous books, movies and all manner of cultural references have been made to Marie Antoinette, who has come to symbolize the beautiful but spendthrift Queen detached from her subjects that were mere ants on an anthill to her. In reality, once she was promised to Louis, she never really had any chance for success and was doomed. Question for students (and subscribers): Do you think any country should still have a monarchy? Let us know in the comments section below this article.

Bashor, Will.  Marie Antoinette’s Head: The Royal Hairdresser, The Queen, And The Revolution.  Lyons Press, 2013.