On March 16, 1621, only about 4 months after landing at Plymouth Rock and setting up their new colony in what was then called Plymouth Colony (Now Massachusetts and Maine) the Pilgrims that had traveled across the Atlantic on the Mayflower had their first friendly contact with a Native person, and that contact came as quite a shock!  On March 16, 1621, Samoset, a member of the Abenaki Sagamore people simply strolled into the Pilgrim village and greeted the Pilgrims in English!  Samoset was not yet through with startling the colonists…

The first thing Samoset asked for after rendering his greetings was a request for beer.  (We cannot make this stuff up.)  The polyglot Native American had learned to speak English from fisherman that had been visiting the New England and Canadian coasts for close to 100 years before the Pilgrims established the first English colony in what became New England.  (Virginia colonies at Jamestown had preceded the Pilgrims by 13 years.) 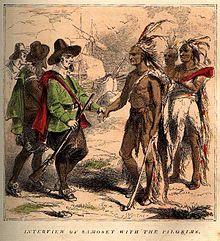 “Interview of Samoset with the Pilgrims”, book engraving, 1853

The Pilgrims had already seen evidence of Native Americans as they explored the area prior to choosing a site for their first village, including burial mounds and mounds that contained stores of corn.  They had helped themselves to some of the corn, meaning to use the seeds to plant as their own crop in the Spring.  On other occasions, Native Americans had fled when spotted by the Pilgrims, and on at least one occasion the Natives had launched arrows at the “invaders,” eliciting some small arms fire in return.

Samoset stayed overnight with his amazed hosts and returned a couple days later with 5 other Native Americans carrying some pelts for trade.  While the colonists declined to trade at that first opportunity, Samoset returned on March 22, 1621, with another companion, this being Squanto, the last member of  Patuxet  tribe who became much better known to history and to American school children as a friend to the Pilgrims.  Squanto, more formally known as Tisquantum, had been kidnapped in 1614 by an English sea captain/explorer and sold as a slave in Malaga, Spain.  (Note: The author has been to Malaga, a really picturesque and beautiful city.)   Educated by European monks and then sent to England, Squanto was dropped off back in North America to return to his home, but found his entire tribe wiped out by disease, leaving him as the sole remaining Patuxet.  Squanto spoke English much more fluently than Samoset and became a legendary figure in the stylized retelling of the Pilgrims and their adventures and travails while setting up Plymouth Colony, especially in a major role attributed to him in the highly mythologized “First Thanksgiving.” 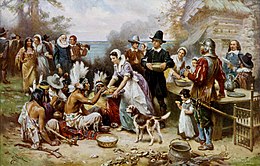 The First Thanksgiving 1621, oil on canvas by Jean Leon Gerome Ferris (1899). The painting shows common misconceptions about the event that persist to modern times: Pilgrims did not wear such outfits, and the Wampanoag are dressed in the style of Native Americans from the Great Plains.

Samoset is recorded as having been entertained by Christopher Levett, an English sea captain, while aboard ship in the harbor at Portland, Maine in 1624.  Samoset’s death is estimated to have occurred in 1653, in Bristol, Maine.  Samoset had also made introductions between the Pilgrims and other important Native American leaders, acting as a sort of ambassador between the Whites and Indians.

A 1622 account of Samoset’s interaction with the Pilgrims is related in Mourt’s Relation, a booklet formally titled A Relation or Journal of the Beginning and Proceedings of the English Plantation Settled at Plimoth in New England, written by Edward Winslow and William Bradford, a primary source for our knowledge of the history of the Pilgrims at Plymouth.  So why is the booklet titled bearing the name “Mourt?”  Because the account was erroneously attributed to somebody named George Morton (aka George Mourt) that was a Puritan involved with the same people that sailed on the Mayflower, but Morton did not make his own voyage to Plymouth until 1623, dying the next year. 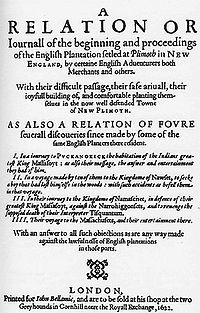 Native Americans played a large role in the successful colonization of North America by Europeans, sometimes voluntarily in a friendly way, sometimes by the establishment of trade.  European settlers certainly learned a lot about the land and ways to survive from Native Americans, especially the use of corn (Maize) as a food crop.

Question for students (and subscribers): What Native American do you most associate with friendly relations with White European settlers?  Were you taught about Samoset in grade school?  How about Squanto?  Please let us know in the comments section below this article. 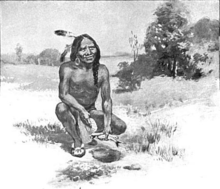 Anonymous. Mourt’s Relation: A Journal of the Pilgrims at Plymouth. Applewood, 1986.

The featured image in this article, a map of the Plymouth Colony by Hoodinski, is licensed under the Creative Commons Attribution-Share Alike 3.0 Unported license.