Tuesday, August 4
Trending
You are at:Home»Beth Michaels»June 18, 1529: Might Catherine of Aragon have Lied?

In 1529 an ecclesiastical, legatine court, presided over by a representative of the Pope, had been created to try the validity of the marriage between Henry VIII and his first wife, Catherine of Aragon. The trial was held at Blackfriars Priory in London, and on June 18, both Henry and Catherine were summoned to appear before the court.

By this point in time, Henry and Catherine, his brother’s widow, had been married for 20 years. Though they had been happy for the majority of their marriage, Catherine had been unable to provide a son who lived past infancy. She did give birth to a daughter, however, the future Queen Mary, also known as Bloody Mary. The lack of a male heir weighed heavily on Henry, as his own father, Henry VII, had gained the throne through conquest and many considered his family an upstart one and his claim without legitimacy. With memories of the Wars of the Roses still so vivid, and despite the fact that most of the male contenders for the throne had already been executed, Henry was uncertain that a female monarch would be able to maintain the dynasty that he and his father had established.

Three factors were to come into play that greatly influenced Henry VIII’s decision to divorce himself from his wife: 1) One of his mistresses, Bessie Blount, had given birth to a son, which proved that he could sire boys; 2) He had read a passage in Leviticus (Chapter 20, Verse 16) – “If a man shall take his brother’s wife, it is an impurity; he hath uncovered his brother’s nakedness; they shall be childless.” Though Henry and Catherine did have a daughter, in Henry’s eyes and in the opinion of most of his contemporaries, girls did not count; and lastly 3) He had met Anne Boleyn, a refreshing, vivacious and charismatic contrast to his aging, dull and pious wife, and who teased him and refused to go to bed with him unless he married her, inflaming his passions even more.

And so, after trying to convince Catherine to go into a nunnery on her own, which she refused, Henry’s henchman Cardinal Wolsey managed to get Pope Clement VII to send a legate, Cardinal Campeggio, to try the marriage for possible annulment, so that Henry might remarry. The basis of the trial was to prove that Catherine was not, as she had protested, a virgin at the time of her marriage to Henry VIII and that her marriage to his brother Arthur had indeed been consummated.

Catherine’s appearance in court on the 21st of June, in which she gave impassioned plea on her knees in front of her husband, asking him to vouch for her integrity and virginity, has been portrayed in almost all movies on this topic, notwithstanding Showtime’s popular series The Tudors. Her leaving the court and ignoring summons to return, as she did not believe the court had the authority to try her marriage, was also just as dramatic.

Catherine is generally assumed to have been a religious, devout and pious woman. For most of her supporters and even adversaries for that matter, it would have been unimaginable that she would lie before God, but WHAT IF SHE HAD LIED? What would have been her reasons? And how would she have been able to justify them to herself? There is also much good evidence that Catherine told the truth, and the author could continue in her defense, but the remainder of this article will take a unique approach to the topic.

Prior to Catherine of Aragon’s arrival in England in 1501, England had been racked by the Wars of the Roses from about 1455 to 1485. This was basically a cousins’ war with two branches of the family – the white-rose Yorkists and the red-rose Lancastrians duking it out for control of the throne which would pass back and forth between the two sides. The wars finally came to an end when the last senior Lancastrian claimant, Henry Tudor, defeated the Yorkist king, Richard III, at the Battle of Bosworth. As Henry was descended from a lesser, illegitimate family line, many considered him a usurper instead of a conqueror. After his own marriage to a senior Yorkist princess, Henry VII set about to find a suitable wife for his eldest son to establish and give international validity to his newly formed Tudor Dynasty. He found her in two of the oldest royal kingdoms in Europe – Aragon and Castile, for Catherine was the youngest daughter of Ferdinand of Aragon and Isabella of Castile, two monarchs in their own right and whose marriage had united Spain. An alliance between the three kingdoms was forged, and Catherine was prepared from about the age of 3 onwards to be able fulfill her destiny as Queen of England. 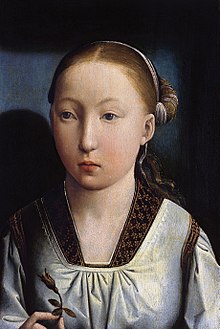 Portrait by Juan de Flandes thought to be of 11-year-old Catherine. She resembles her sister Joanna of Castile.

One can only then imagine Catherine’s distress when her first husband died just five months after the wedding – her entire raison d’être (reason for being) was put at stake! Talks soon began to betroth her to her husband’s younger brother, and she must have known that her market value would be much higher if she was still a virgin. This was compounded by the fact that after her mother’s death, the larger of the Iberian kingdoms, Castile, fell away from the alliance, and Henry VII considered sending her home to her father. This would have meant utter failure and shame for Catherine.

At any rate, despite what Catherine later protested, no one believed her a virgin anymore at the time. After her first wedding night with her first husband, he boasted to his friends that that night he had been in Spain. And when negotiations were underway to marry her to his brother, a papal dispensation was sought. A papal dispensation would only have been necessary if Catherine had no longer been a virgin, as the Catholic Church did not recognize marriage that had not been consummated. 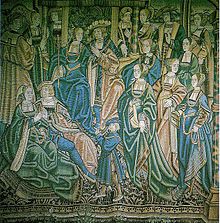 Whatever was going on in Catherine’s head and with all the confusion around her, she probably thought it best to claim to be virgo intacta, especially since the only person who could truly debate this was dead. If she was or not, she definitely was not anymore after her eventual marriage to Henry VIII, and she left it up to him at Blackfriars to deny that she had been a virgin on their wedding night. He, on the other, probably would not have in a position to determine that, as he himself, as protected by his father as he had been, was a virgin at the time, and she was the more experienced of the two and older by almost 6 years. In other words, she put him on the spot in front of the court, and he was made uncomfortable by it.

As devout as Catherine was, her refusal to go into a nunnery, shows her greater attachment to her position as Queen than to a religious life. In addition it is quite curious why Catherine prayed for hours, practiced penance and wore a hair shirt as a form of self-punishment. Was this because she was lying?

If at first, she may have lied to ensure that she fulfill her destiny and become Queen of England, she may later have lied to protect her daughter’s claim to the English throne and prevent her from being declared a bastard. Whereas Henry VIII had no faith in women rulers, Catherine, on the other hand, as daughter of the Warrior Queen, Isabella of Castile, had much more confidence in the future and abilities of her own daughter. In addition, Catherine, herself, had been quite capable a ruler, and it was under her regency while Henry was away fighting in France, that the English army defeated the Scots at the Battle of Flodden and killed their King James IV in 1513.

Whatever she had hoped to ultimately achieve, Henry did eventually divorce her, even though he had to break away from the Church in Rome to do so. Her daughter did in fact become queen, but her efforts to bring England back to Catholicism left her hated. It would be Elizabeth I, or Gloriana, the daughter of Catherine’s rival, Anne Boleyn, who brought about England’s Golden Age.

Whether she had lied or not, the sad fact of the matter is that had just one of her sons survived, Henry would never have divorced her, for he, himself, had often said, she had been the perfect wife and queen and that he would choose her above all others. It was her destiny, and she played it well, but it was her biology that brought her down. And that faulty biology may in part have been due to her religious devotion, but that is another article…

For part 2 of this series, please read the History and Headlines article: What if Anne Boleyn Had Slept with Henry VIII?

Question for students (and subscribers): Should Henry have maintained his marriage to Catherine?  Please let us know in the comments section below this article.

Share. Twitter Facebook Google+ Pinterest LinkedIn Tumblr Email
Previous ArticleJune 13, 1893: President of the US has Much of Upper Jaw Removed! Public Kept in the Dark!
Next Article June 22, 2002: Do You Miss Ann Landers? Ask Beth Michaels!