Thursday, July 9
Trending
You are at:Home»Society»Crime»Jack the Ripper’s Double Murder!

On September 30, 1888, unidentified serial killer Jack the Ripper killed his third and fourth victims, Elizabeth Stride and Catherine Eddowes.  The incident known as the “double event” is the only such instance of the Ripper committing two murders on the same night.

Without any doubt, Jack the Ripper has been for over a hundred years now the world’s most well-known unknown serial killer.  The amount of books, graphic novels, and films on the murderer far surpass any other, although his real identify remains a mystery.  The number of suspects offered are legion and tickle the fancy of professional and popular historians alike.  The reason for such interest almost assuredly stems from the brutal nature of his crimes and the infamous letters with which the alleged killer apparently taunted the press, the police, and the public.

Of all the nights of his reign of terror, the night of September 30, 1888 holds a particularly frightful place in Ripperology, the study of Jack the Ripper.  On that dreadful night, the Ripper committed not one, but TWO of his heinous acts upon London’s prostitutes.

His (if the Ripper was indeed a man, as yes, some have suggested it may have actually been a “Jill the Ripper”, but we’ll leave more on that speculation for another day) first victim of the night was “Long Lis” Stride.  Of the Ripper’s victims, her murder remains unique, for unlike the other victims, who had severe abdominal injuries in addition to the signature slash across the neck, Strike had no mutilations beyond her slit throat.  Because Stride’s murder does share similarities to the pattern of Ripper killings, including date, time, type of site, type of victim and the slit throat, Ripperologists argue that the killer may have been interrupted before he had the opportunity to mutilate the body. 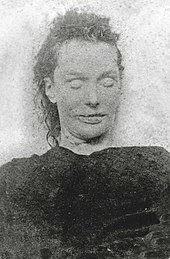 Mortuary photograph of Elizabeth Stride. She was 5 feet 2 inches tall, was missing her front upper teeth, and had curly dark brown hair, light grey eyes and a pale complexion.

“Kate” Eddowes had her run in with the Ripper less than an hour later.  Her murder does not seem to have been interrupted as her body was mutilated in a manner that we suspect would be too disturbing to describe to a general audience.

Suffice it to say, her missing kidney was only part of the butchery committed upon her body.  We bring up the kidney, because just over two weeks later on October 15, 1888, a letter sent to a Mr. George Lusk contained part of a kidney and read as follows: “I send you half the Kidne I took from one women prasarved it for you tother piece I fried and ate it was very nise.” (spelling errors are as they appeared in the original version)  The letter was marked “From Hell” and served as the inspiration for the same titled graphic novel and film starring Susan Lynch as Liz Stride and Lesley Sharp as Kate Eddowes.

Question for students (and subscribers): So, do you believe these murderers were the work of the same criminal?  Please let us know in the comments section below this article.

From Hell (2001) is a well made movie that offers a full blown conspiracy theory as to who may have been the Ripper.  For intriguing accounts of other theories that delve deeply into the above discussed double event, I encourage you to read Jack The Ripper: First American Serial Killer

and Jack the Ripper: The American Connection