Sunday, February 23
Trending
You are at:Home»August»August 15»August 15, 1769: Napoleon, Simply the Greatest Mortal Human in All of History?

On August 15, 1769, little Napoleon Bonaparte was born on the island of Corsica, to ethnic Italian parents, although living on what was then a French island, having been transferred to France by Genoa only a year earlier.  Had that transfer not taken place, history may have been quite different indeed!

Napoleon Bonaparte is the most written about human mortal being of all time (Jesus Christ, arguably not a mortal human being is the only person with more written about him), which is an indication of why we consider him for classification as the “Greatest Mortal Human of All of History.”  His last name was changed to seem more French and less Italian. 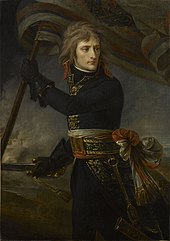 As a child, Napoleon hungered for a military life, and as such entered the French military at a young age, attending the Ecole Militaire (French version of West Point) in 1784, becoming the first ever Corsican graduate of that school.   Rising through the ranks, Napoleon showed rare tactical judgement and extreme personal bravery, and was as loyal to his troops as he was to his superiors, earning the loyalty and trust of his men.

During the French Revolution Napoleon rose to prominence and became First Counsul, de facto leader of France in 1799.  In 1804, Napoleon crowned himself Emperor of the French, taking the crown from the Pope and placing it upon his own head in a famous coup of bravado.  The numerous wars and military campaigns that preceded his coronation continued while Napoleon was emperor, earning his the fear and hatred of his enemies, especially the English.  This enmity toward a long time enemy created a British bias against Napoleon and resulted in historical slander against the great man, including slurs about his (lack of) height when in fact he was average height for his time.

The Coronation of Napoleon (1804) by Jacques-Louis David

In reality, Napoleon was a visionary that reformed laws and society, diminishing the role of the nobility and raising the common man.  Many other countries copied the Napoleonic Code of laws and it remains a basis for much of the law in the modern world.  Napoleon honored scientists and encouraged scientific research, and is responsible for the adoption of the Metric system.

Napoleon and the French were defeated by a coalition of enemy countries in 1814, the Grand Armee having been severely weakened by the disastrous foray into Russia in 1812.  Napoleon was exiled to the nearby island of Elba in the Mediterranean Sea, where he learned of English plots to renege on his terms of surrender and escaped back to France to re-take his throne in 1815.  In a period known as “The Hundred Days,” Napoleon rose to power once again and was set upon by an alliance of enemy countries, spearheaded by the hated English.  Defeated at Waterloo, Napoleon was again forced to surrender, abdicate his throne, and this time was exiled to the distant and remote island of St. Helena in the Atlantic Ocean, the British careful to avoid another escape by Bonaparte.  There Napoleon lived out the rest of his short life, dying at the age of 51 in 1821, possibly due to murder by poison! 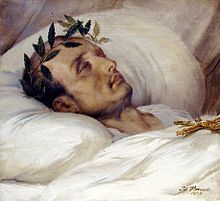 Napoleon on His Death Bed, by Horace Vernet, 1826

A genius on the battlefield, Napoleon was said to be worth “10,000 men” by his mere presence.  Although his personal descendants were greatly limited by his limited offspring, the descendants of his first wife, Josephine, include many of the crowned heads of Europe today.  A gifted administrator, Napoleon knew how to manipulate religion of all sorts to his own advantage, though it is likely he was not a believer himself.  Numerous towns, cities, buildings and other places are named in his honor, as is Napoleon Cognac (Brandy) and (maybe) the Napoleon dessert.  The French Legion of Honor is his creation, as is the Arc de Triumphe.  Napoleon shaped history and the map of Europe for many years to come, leaving a giant mark on the history of mankind.

A particularly excellent book about Napoleon Bonaparte, Simply Napoleon, by authors J. David Markham and Matthew Zarzeczny, becomes available today through Amazon (https://www.amazon.com/gp/product/B07262K8BF/ref=as_li_tl?tag=geolinker-20&ie=UTF8) in electronic form, with a paper version to follow.  This work is fairly brief and to the point, appropriate for amateur historians, scholars, and school children, an entertaining read without distracting minutiae.  Nifty associated items such as T-shirts, mugs, pillows and prints are also available with the Simply Napoleon motif.  See the following link for Simply Napoleon and other books in the Simply Charly series: https://www.simplycharly.com/people/napoleon-bonaparte/read/books/simply-napoleon/#gs._8_m7Ys.

Simply Napoleon by J. David Markham and Matthew Zarzeczny (This image was emailed to this website’s owner by the book’s publisher and is used here to help promote this book.)

Question for students: What do you think was Napoleon’s greatest contribution to humanity?