On June 10, 1942, and again on June 10, 1944, the German army committed atrocities in Czechoslovakia (Lidice), France (Oradour-sur-Glane), and Greece (Distomo, Boeotia) in separate incidents.  Slaughtering or massacring innocent civilians or prisoners of war was a sadly not uncommon practice of one of history’s most brutal regimes.  Here we list 10 such examples of how rotten the Nazis really were, and thus why there should be no romanticizing about their “glory days.”  Indeed, with good reason, multiple Nazis appear on the list of most evil people in history due to their many atrocities.  Most of these atrocities were committed by the SS, political Nazi fanatics, and not the regular German troops. (Note:  The Soviets and the Japanese were pretty awful as well.  Although the US, Britain, and other countries had incidents of their military engaging in barbarism, none of that was state sanctioned or normal behavior.)

So many villages were burned and their occupants murdered that about 25% of all the population of Belarus died during Nazi occupation, a staggering amount.  Although the Nazis brutalized the people of any Slavic country they invaded, Belarus was the hardest hit.9.  Imprisoning/Killing “Undesirables,” 1933-1945.

Not only Jews were the target of Nazi hate.  Jehovah’s Witnesses, Gypsy (Roma), homosexual, the retarded, people with severe birth defects, communists, dissenters, and even loyal Germans that were suspected of “defeatism’ were likely to be imprisoned or murdered.  The persecution of non-Jews resulted in about 5 million deaths, almost as many as with the Jewish Holocaust.  Non-Jews that were married to a Jew were forced to divorce or end up herded into death camps with the Jews.  People of African descent were at a minimum sterilized.  Of course, hiding or helping any of these people would get you arrested and or murdered as well.

So many massacres that included or consisted of the slaughter of children were perpetrated by the Nazis that we do not have room to list them.  Suffice to say, time and again the Nazis showed no hesitation to murder kids.7.  SS Units Murdering POW’s, 1941-1945. 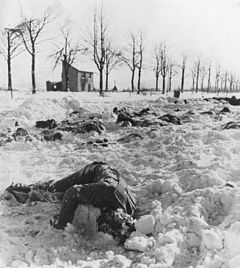 Again, as with killing children, the SS committed so many massacres of troops that had surrendered that we do not have room to discuss individual cases.  Just a couple of the more famous (in the US) are the Malmedy Massacre and the Wereth Massacre (where African-American US soldiers were murdered after surrendering).  Joachim Pieper, commander of an SS unit responsible for many of these massacres was himself murdered and burned at his home in France in 1976, finally getting justice.  It became fairly common for US troops to shoot any SS officer they captured toward the end of the war in retaliation for these murders.6.  Orders to Kill, 1941-1945.

Hitler himself ordered that all Soviet communist party officials (commissars) captured should be immediately shot.  He also ordered that any allied commandos that were captured should also be shot even if they were in full uniform and following the laws of war. 5.  Human Experiments, 1941-1945.

Once work and death camps were established it did not take long for Nazi pseudo-medical “researcher” to start conducting barbaric and bizarre experiments on people.  “The Angel of Death,” Joseph Mengele is the usual suspect in this practice, but there were plenty of others.  Freezing people to see how long it took them to die, seeing how long people could live eating sawdust, sewing on arms and legs on the opposite side of the body or to other people (after amputating perfectly sound limbs), and torturing twins to see if the other one felt the pain from a distance were all in their bag of tricks.  Psychotic experiments with poisons and poison gas were conducted, and people were given only seawater to drink until they died. (Note:  The Japanese had a similar human experiment unit, Unit 731.)4.  V-Weapons, 1944-1945.

Consisting of the V-1 cruise missile and the V-2 rocket, each carried about a ton of explosive and neither was accurate enough for targeting anything of military value, so they were just aimed at cities in order to terrorize the civilians.  England, mainly the London area, suffered most of the attention, but once the allies started liberating countries on the continent those came under attack as well.  This was pure hateful vindictiveness as the cost to operate this campaign was enormous for so little gain.  Killing and terrorizing civilians was the only goal and only result.3.  Bombing Rotterdam, 1940.

On the same day that the Netherlands (Holland) surrendered to Germany, the Luftwaffe bombed Rotterdam into rubble to punish the Dutch for having the audacity to resist.  A ceasefire had already been negotiated, but the heartless Nazis killed 900 civilians and made another 30,000 homeless just to make a point.2.  Invading the Soviet Union, 1941.

In spite of having a “non-aggression pact” treaty with the Soviets and having collaborated with them to divide Poland, the Nazis betrayed their trust and broke their word by mounting a surprise invasion of the Soviet Union in 1941.  On top of it, despite their earlier cooperation and trade agreements, the Nazis were particularly brutal, often slaughtering prisoners, conducting reprisals anywhere partisan activity took place, and starving the prisoners they did take.1.  The Holocaust (The Final Solution), 1933-1945.

At first the Nazis were using the Jews as scapegoats to rally the masses.  Then it was forced movement to ghettos and concentration camps, including work camps where prisoners would be worked to death.  Then it became clear to the Nazi party elite; the “final solution” was to exterminate the Jews from Europe, killing as many as they could, whether they were German Jews or from occupied countries.  Even Jewish war heroes from World War I were targets!  The number of Jews murdered is usually given as 6 million, and although other groups suffered under Hitler and the Nazis, none so much as the Jews.

Question for students (and subscribers): What do you think was the worst things the Nazis ever did?  Please let us know in the comments section below this article.

Walters, Guy.  Hunting Evil: The Nazi War Criminals Who Escaped and the Quest to Bring Them to Justice.  Broadway Books, 2010.