On April 25, 1792, the guillotine was served its first victim.  Meant to be a humane form of capital punishment, other modern forms have also attempted to achieve a quick and painless death for the condemned.  Other methods have been purposely designed to cause pain and terror, both to the condemned and to potential violators. H ere are 10 methods of execution that are not very humane, even if they were intended to be. Obviously, there are many more interesting methods of execution, so stay tuned for a sequel list on this website.

Brutally simple, Native-Americans would have the condemned person lay their head on a flat tree stump and give it a good smash with a war club, hopefully killing the person quickly.  Undoubtedly some victims required more than one blow, and in any case, it had to be a gruesome sight.  This method of execution was what Pocahontas saved John Smith from in Virginia.

Millions of people have been intentionally starved to death by other people, both individually and en masse. The Soviets starved 6 million Ukrainians during the 1930’s and the Turks starved millions of Armenians during and after World War I.  Nazi concentration camps were the scene of mass starvation, as were Soviet POW camps holding German prisoners.  Sometimes, a single prisoner would be held in a cell and not fed until he/she died, often in the case of nobility as the executioners could claim they did not actually kill the person. 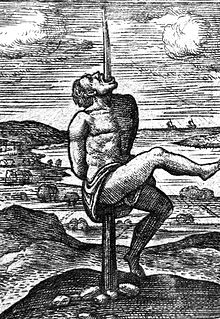 Remember Vlad the Impaler? (Better known as Dracula.)  He would have political enemies sat down hard on a pointed stake like a human shish ke-bab where they would sit in pain until death came.  Some Native-Americans also used this not so humane form of capital punishment.

In the case of cannibals, this process could serve both as execution and preparing dinner.  Boiling people did not always involve water, as other bubbling stuff such as tar, animal fat, oil, or molten lead could be used.  If boiling ever happens to you, you will know how a lobster feels!  Victims could be slowly boiled or dropped right into boiling liquid, executioners choice. 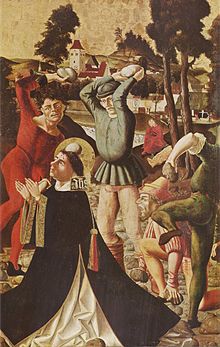 The only method listed here that is still used in some places (Islamic) as an official form of execution.  Not as simple as it sounds, the crowd throwing the stones has to use stones big enough to bring about death, but small enough to make that death come slowly so the victim can suffer.  Plus, it is considered bad form to clunk the victim in the head an knock them out before they are thoroughly pummeled.  The 1948 short story by Shirley Jackson, The Lottery, is about ritual stoning in backwoods America.

A coffin like device shaped like the outline of a human being with many metal spikes inside would be closed on the victim, causing many puncture wounds and eventually death.  This device is the only item on the list that is suspected of being a fictional creation, although museums have examples on display.  The idea would be to wound the person inside without killing them quickly, sometimes poking out the eyes in the process.  A 1962 comedy film called The Iron Maiden was made and a popular heavy metal rock group went by the name, Iron Maiden.  Uday Hussein, son of Saddam Hussein of Iraq is reputed to have had an iron maiden constructed.

When the ancient Greeks were not busy inventing democracy and geometry, they came up with a large, hollow, bronze bull large enough to hold a person inside.  That person would be locked inside, then a fire built under the bull and the person would be slowly cooked to death.  The bull was constructed to amplify the screams of the victim while they were cooking, giving the impression the bull was bellowing.

Often done where the victim is intentionally burned slowly so as not to quickly pass out from smoke inhalation, victims accused of heresy and witchcraft were often burned.  The execution of alleged witches in Salem, Massachusetts was not done by burning, but by hanging.  Oftentimes burning was used as an individual method of execution, but also at times people would be rounded up and put into a locked building and burned to death as a group.

Sometimes just killing someone is just not good enough. In those cases, executioners have combined various methods, such as whipping/lashing, partially burning, beating, starving, breaking bones, time on the “rack,” nearly drowning and other forms of not quite fatal torture until the person either dies or is given the coup de grace.  Crucifixion can be considered a form of combination execution.

Note: In April of 2019 Saudi Arabia reported the government had executed 37 suspected terrorists, one of those executions coming by way of crucifixion!

Animals at times can willingly or unwillingly participate in the execution of people, as Christian martyrs thrown to the lions can attest.  Tossing people into a pit of crocodiles, poisonous snakes, or fed to sharks have all been tried.  Getting an elephant to sit on a hapless victim is also a method of execution, and probably explains why elephants are not “mans best friend!”  Of course, being tied to a horse and dragged to death is not a smooth ride, nor is having horses tied to each of your limbs and being pulled apart (drawn and quartered).  The next time you hear of someone being “thrown to the wolves” think of History and Headlines!

Question for students (and subscribers): How do you think people should be executed? (If at all.)  Please let us know in the comments section below this article.